We all know that we should involve our kids in fitness and sports activities - but sometimes homeschooling and sports can be a difficult combination!

Luckily there are some great kids sports activities you can do at home, or in your local park,  with even just a couple of kids! Check out these great ways of ensuring kids physical fitness. 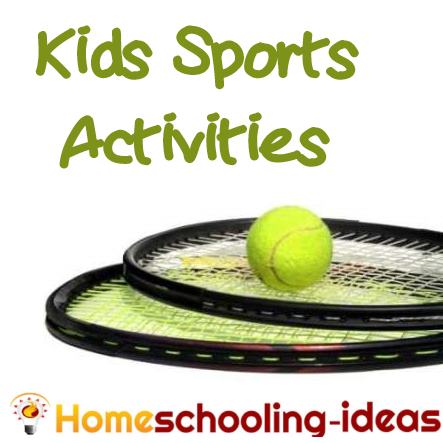 Got a budding athlete? This expert tells you the best fitness activities for kids who play sports.

Tennis is an easy game to set up in your backyard, and can be played as "singles," or "doubles".

A makeshift court can be laid out on grass using tape, or drawn out with chalk on a hard surface. You will need a net between the players - a long piece of string tied to trees or fence posts works well.

In playing one of the players 'serves' the ball so that it will go over the net and into a specified space on the opposite side. His opponent then attempts to return the serve by hitting the ball (either on the fly or the first bounce) and knocking it back over the net somewhere within the playing space as determined by the lines. In this way the ball is played back and forth until one of the players fails either to return it over the net or into the required space. If this happens his opponents score a point. Four points wins a game except where both sides have got three points, in which case one side must secure two points in succession to win.

At this point a lead of two is necessary to win. The side winning one of the two points at this stage is said to have the "advantage".

A 'set' of tennis consists of enough games to permit one side to win six, or if both are at five games won, to win two games over their opponents. 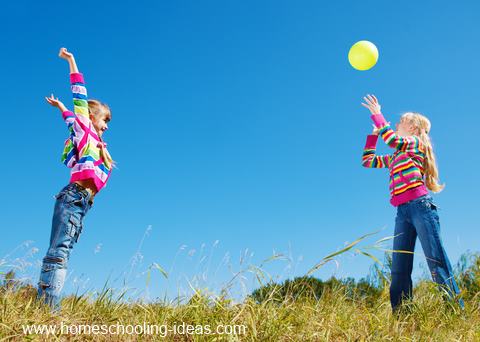 This game is played between two parallel straight lines, 3 feet 6 inches apart (or however much space you have!) and marked on the lawn with two strips of tape or string.

If you keep the playing area small, then this makes this an exciting game for even just two players.

At the opposite two ends of the tape are two goal posts 14 inches wide (with a crossbar if you can manage it - but we usually just use two tubs to mark the goal area).

The game is played with balls and hockey sticks. Start by placing the ball in the centre of the field. The two captains then face each other and at a signal strike off. If the ball is driven outside the tape boundaries it must be returned to the centre of the field opposite the place where it crossed the line. The object of the game is to score a goal through your opponents' goal posts as in ice hockey.

If a player steps over the the tape out of the playing space he commits a foul. The penalty for a foul is a free hit for his opponents.

This game may be played either by two or four persons. Wickets are placed at irregular distances, and the object of the game is to drive a small ball (a tennis ball works fine) through these wickets.

We set up each wicket by using two tin cans, set about 4" apart (or wider for younger players).

It may be played either as "all strokes," in which the total number of strokes to get through all the wickets is the final score, or as in golf, "all wickets," in which the score for each wicket is taken separately, as each hole in golf is played. Whoever wins the most holes, wins the game.

Use a hockey stick, golf club, croquet mallet or plain old stick to hit the ball around the course. A piece of ground 200 yards long will make a good six-wicket course. 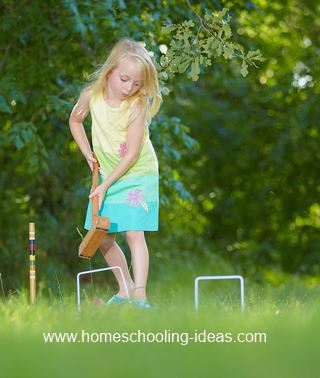 This game is usually played with wooden balls five inches in diameter and painted in various colours. For our lawn version, we just collect together an assortment of different colored balls (usually different sizes too)!

Each player uses two balls. A white ball, called a "jack ball" is thrown or placed at the end of the bowling green or lawn, and the players take turns to throw their balls toward the jack.

When all the players have bowled, the two balls nearest the jack each count a point for the person owning it.

This is one of our favourite kids sports activities!

It is easy to set up a bowling alley in even a small backyard. Use large plastic drinks bottles, weighed slightly with some dirt, to act as pins.

The ten pins are set upon a flat surface on the lawn and the players have to try to knock down as many pins as possible in two attempts. The scoring is the same as in ten pin bowling. To knock down all ten pins with one ball is called a "strike," in two attempts it is a "spare." In the score, the strike counts ten for the player plus whatever he gets on the next two balls. Likewise he will count ten for a spare, but only what he gets on one ball for a bonus.

You may need to experiment a little with the weight of the pins, and the size of the ball you use! Light pins, and a soccer ball makes good kids sports activities for toddlers.


If your children enjoy these sports activities, why not form your own homeschool sports group?