The has been much debate about the effects of computer games on children. Like many homeschooling Mums, I have worried from time to time about my children playing games on the PC.

I can only speak for myself and my children, but thinking about it, we have seen some wonderful learning opportunities that have arisen as a direct effect of computer games. Of course, I couldn't dictate these results - we have played many games where nothing educational seemed to happen and the children enjoyed only the entertainment value! But looking back, a lot of valuable learning has been initiated by certain games.

I wanted to give some specific examples so my thoughts on this are below. Note that I am not recommending these games - merely outlining the effects of computer games on our homeschool learning. 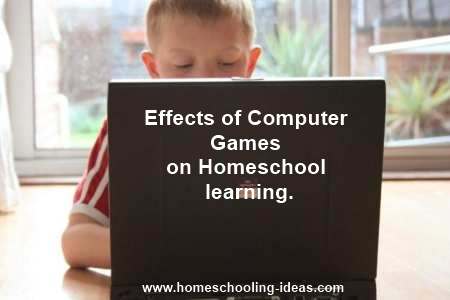 Zoo Tycoon
I like the tycoon games and my children have enjoyed Zoo Tycoon in particular. In this game you build your own zoo and have to keep it running. There is quite a wealth of animal information built into the game and the children have to learn what each animal requires (in the way of food and space) in order for the animal to flourish. This game also inspired several zoo games using toy animals. Indeed, one of the effects of computer games does seem to be to stimulate the imagination.

Age of Mythology
This game provides a wealth of Egyptian, Norse and Greek mythology. I can honestly say that it was this game that instilled in my daughter a love for all things Egyptian. We followed up the game with lapbooks on these areas, visits to museums to look at artefacts, and lots of TV documentaries. We also got lots of books on the subject - see my review. So all in all - this game initiated a complete project on the subject of mythology.

The Simms
The children enjoyed this and said they learnt basic economics, and how to look after a family. But they wanted a whole village of families, and not just one - so they developed a paper game that morphed into a complete city. This included a complete economy - the 'rich' paper people were often demoted into poorer paying jobs so the 'poor' paper people could have a turn at getting a good income!!

Runescape
I was initially (and I think I still am) suspicious of this game - but I cannot deny the educational benefits we have seen.

The first thing my children began to explore was the mining and smithing part of the game. This prompted a lot of questions about how metals were really made. We developed this into a mining project that eventually covered


Again, we explored what they had learnt in the game though books, videos and trips to mines. We also began to look at the periodic table and began collecting examples of different metals.

As they played more runescape they began to look up ideas on the internet as to how to play better. This prompted them to start their own blogs, initially about Runescape but then my daughter began to blog about her puppy (see Homeschooled Kids Carnival).

My children also really want to develop their own version of runescape. They journal a lot about the imaginary worlds they will create and the quests and challenges they will build into the game. Recently they have been drawing out maps. We had a discussion about programming. As a way to help them think logically about the quests I showed them how to flowchart. We also began looking into Java programming for kids and bought Stagecraft Creator (see my computer homeschool page), in which they have begun building their own (more limited) games.

Would the children's time have been better spent without the computer games? Possibly!

Would the children have developed an interest in these things anyway? Some of them - but I think the games have helped to develop their interest in certain things and made it more 'real' for them.

We do restrict PC time somewhat. I think it is often easier for children to sit and tune into a game rather than think of something to do - and that is why I have developed 'this schedule'.

Without moderation, I think the effects of computer games could be damaging. But used sensibly, the computer game CAN be a great addition to your homeschool learning!


What J's son has learnt from video games.